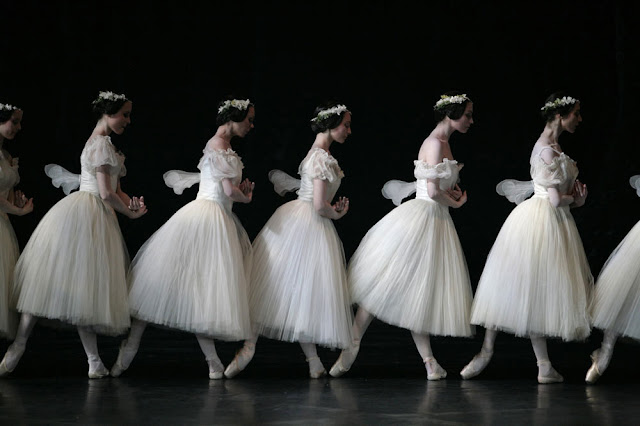 I last saw the Paris Opéra Ballet at the Metropolitan Opera House sixteen years ago in Nureyev's staging of La Bayadère. The company returned to Lincoln Center last week and so I got tickets to three different programs that showcased its latest roster of dancers.

On July 15 I attended the mixed bill which opened with Serge Lifar's Suite en Blanc, a plotless ballet about a series of variations d’école, pas de trois, pas de cinq, adages and ensembles. It's a bit like Harald Lander's Études though not quite as dry and formulaic. Indeed Sabrina Mallem, Audric Bezard, and Vincent Challet imbued the Theme Varié with elegance and poetry, and the cast as a whole danced with crystalline lightness and precision.

Roland Petit's L’Arlésienne is a different sort of ballet. From what I gathered, the story is about the marriage of young man (Jérémie Bélingard) to his fiancee (Isabelle Ciaravola). The young man can't reciprocate the affection of his new wife because he is tormented by his first and true love's infidelity.

The choreography seemed inspired by Les Noces and Le Spectre de la Rose but the whole point of the ballet seemed to be the "mad scene" on the wedding night, where Bélingard rips his shirt off in despair and dances a manic solo before leaping out the window to his death. Melodramatic, for sure, but entertaining nonetheless.

The program concluded with Maurice Béjart's delightfully trashy Boléro, a reinterpretation of Nijinska's original choreography, this time setting the soloist (of either sex) on a platform surrounded by leering male onlookers who, as the music progresses, one by one start gyrating in an equally suggestive manner.

The basic movement is the slow thrusting of the hips to the repetitive beat. Aurélie Dupont was a suitably slinky temptress who managed to exude supermodel hauteur instead of vulgarity.

On July 19 I attended the highly anticipated Giselle, perhaps the most famous French ballet. The sets and costumes, recreated from a 1924 production designed by Alexandre Benois, had a misty nostalgia that suited the French dancing style: soft arms, restrained acting, precise footwork, and a breathtaking synchronicity among the corps.

In keeping with the company's mandatory retirement age of 42, Clairemarie Osta gave her farewell appearance in the title role. Her husband Nicolas Le Riche played Albrecht and there was such a sweet, melancholy aspect to their performance. Their acting was understated yet tender and moving. Their dancing emphasized correct form over virtuosity which gave the ballet a seamlessness that I haven't noticed before.

Yann Saïz almost stole the show as Hilarion. His elegant line and charismatic presence lent a visceral tension to his scenes with Le Riche and the willis. Heloise Bourdon and Axel Ibot performed the peasant pas de deux with clarity and vivacity.

My final ballet was Orpheus and Eurydice on July 22. I'm familiar with Pina Bausch's work only through Youtube videos  and was curious to see how she would adapt her raw expressionist style to Gluck's  lyrical score.

Well, the choreography wasn't anything like the videos. It didn't even seem like Pina Bausch. Rather, I thought it was derivative of Martha Graham, particularly Lamentation, Errand into the Maze, and Night Journey, among her other works. The set evoked Graham's symbolism as well.

There were a few ravishing moments such as the entry into Hades, and it was a nice change to see modern dance performed in near perfect unison. Part of the appeal was the extreme physical beauty of the dancers, both male and female, as well as each gender's nearly uniform builds and heights.

Stéphane Bullion (Orpheus), Marie-Agnès Gillot (Eurydice), and Muriel Zussperreguy (Love) performed their roles with great ardor and commitment but unfortunately the effect was somewhat dulled by the sheer repetitiveness of the movements (which didn't seem to vary with the libretto).

My one regret is that I didn't see more performances, particularly of Giselle. I do hope that this most aristocratic of ballet companies plans to return New York City again soon.

Email ThisBlogThis!Share to TwitterShare to FacebookShare to Pinterest
Labels: Dance